Cultivation involves disturbing the soil or thatch using various methods to achieve important agronomic goals: compaction relief, thatch/organic matter reduction, and improved water and air exchange. However, cultivation can require significant time for recovery, thus disrupting play, and should be used judiciously. Cultivation frequency should be based on traffic intensity, level of soil compaction, and the amount of accumulation of excessive thatch and organic matter, which reduces root growth, encourages disease, and creates undesirable playing conditions. Cultivation techniques include core aeration, deep drilling, verticutting, grooming, solid tining, and spiking/slicing. The table below lists these cultivation approaches and presents a relative ranking of the agronomic benefits of each (republished with permission from Environmental Best Management Practices for Virginia’s Golf Courses, Table 7-4, p. 94):

Core aeration is effective at managing soil compaction and aiding in improvement of soil drainage by removing small cores or plugs from the soil profile. Cores are usually 0.25 to 0.75 inches in diameter. Using bigger tines and therefore removing larger cores will disrupt play for longer.

Deep-drill aeration creates deep holes in the soil profile through use of drill bits. Soil is brought to the surface and distributed into the canopy. Holes can be backfilled with new root-zone materials if a drill-and-fill machine is used. These machines allow replacement of heavier soils with sand or other materials in an effort to improve water infiltration into the soil profile.

Vertical mowing (verticutting) can be incorporated into a cultural management program to achieve a number of goals. The grain of a putting green can be reduced by setting a verticutter to a depth that just nicks the surface of the turf. Deeper penetration of knives will stimulate new growth by cutting through stolons and rhizomes while removing accumulated thatch. Deep verticutting (0.5 to 1 inch depth) removes a greater amount of thatch than core aeration and can be considered for aggressive thatch removal as it can remove up to 15% of the thatch at one time. However, it is aggressive and should only be done during less stressful times (e.g., cooler temperatures) and on well-rooted turf. Unlike deep verticutting, shallow verticutting (0.5 inches or less) does not remove thatch. Instead, it severs stolons to promote new growth while also standing up blades for removal of old growth and minor canopy thinning. Shallow verticutting can be practiced regularly during the growing season except in times of drought or excessive heat.

Groomers, or miniature vertical mowers attached to the front of reels, are effective at improving management of grain and improving plant density through the cutting of stolons, but provide very low/no compaction or thatch relief.

Solid tining causes less disturbance to the turf surface and can be used to temporarily reduce compaction and soften surface hardness during months when the growth rate of grasses is reduced. However, the benefits of solid-tine aeration are temporary because no soil is removed from the profile, except when using a deep tine aerator with a “kicking action” that results in some soil loosening. “Venting” or “needle-tining” is often used to describe the practice of solid tine aeration using small-diameter tines (0.25 to 0.375 inches). This is an effective tool that can be used to help provide increased gas exchange to root systems and can be particularly useful in alleviating summer stress on putting greens. It can also be performed with minimal impact on putting surface quality when followed by mowing or rolling. 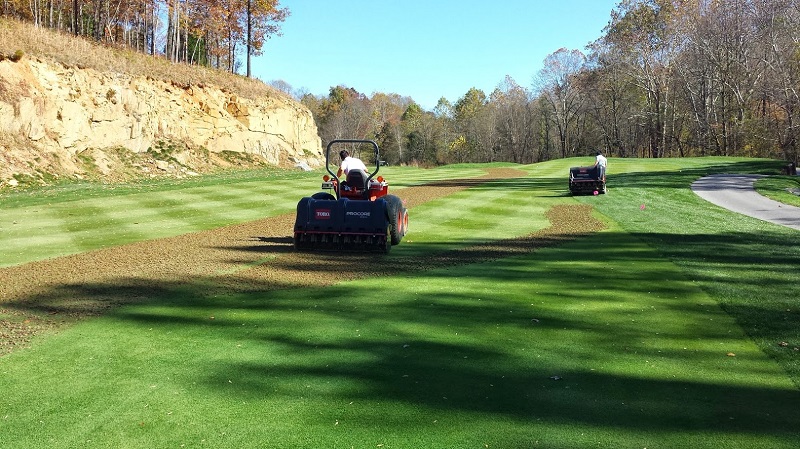 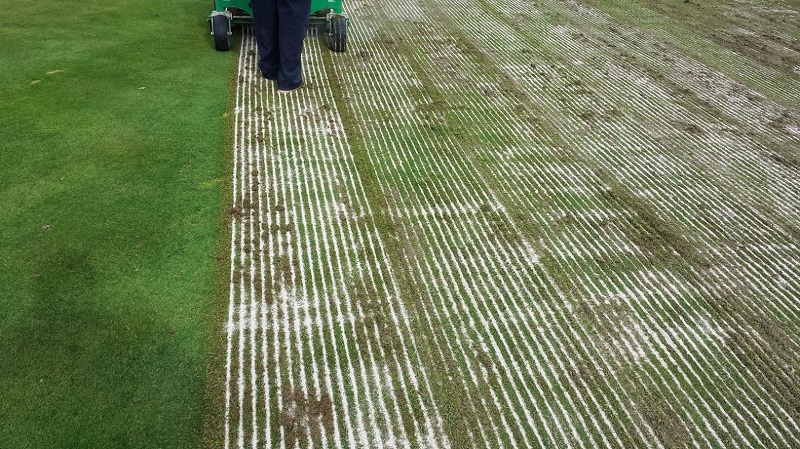 Vertical mowing (verticutting) can be incorporated into a cultural management program to achieve a number of goals. Photo credit: Chris Harriman.